The first US Air Force B-1B Lancers resumed flight operations on May 3 after the entire fleet was grounded in April because of fuel pump defects.

Individual B-1B aircraft will return to flight as inspections and maintenance directed during the stand-down are completed on each aircraft, the service said.

During the safety stand-down, maintenance depot personnel disassembled the augmenter fuel filter housing and performed a series of inspections using the latest techniques. After each unit was determined to be free of defects, it was reassembled, pressure checked, and returned to service.

“We are proud of the tremendous efforts of our maintainers and B-1 partners in identifying, inspecting, and remediating any potential issues with the B-1B fuel filter housing,” said Maj. Gen. Mark Weatherington, 8th Air Force commander, who is responsible for the Air Force bomber force. “The aircraft are still safe to fly and we are confident that this stand-down has resulted in increased safety within the B-1B fleet.”

The entire maintenance, depot, engineering and acquisition team must be commended for getting the B-1B bombers back into the hands of warfighters in a very short time, according to Air Force Global Strike Command officials.

Although this was an Air Force enterprise-wide effort, special thanks must go to the maintainers at Ellsworth AFB, S.D., Dyess AFB, Texas and the AFGSC staff, as well as Air Force Sustainment Center’s depot team, Air Force Life Cycle Management Center’s B-1 Program Office and Propulsion Directorate, the Air Staff and the Secretary of the Air Force office of Acquisitions, Technology and Logistics on their efforts.

This April grounding was not the first such instance for the Lancers with two groundings in 2018 and 2019 over ejection seat malfunctions. The most recent incident involving the B-1B took place during the highly-publicized Bomber Task Force mission to Norway earlier this year, when a Lancer suffered severe damage after one of its engines sucked in a tablet computer. According to a War Zone report, the incident resulted in the sacking of a maintenance squadron commander at Dyess Air Force Base in Texas.

This year’s grounding also occurred against the backdrop of the retirement of the first of 17 bombers that are scheduled for this year. This will will leave the service with 45 aircraft in the fleet. Worth noting is that four of the 17 airframes will be required to remain in a reclaimable condition that is consistent with Type 2000 recallable storage. 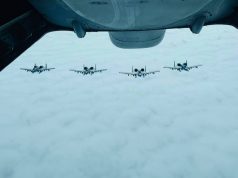