The US Congressional Research Service (CRS) has released a report on the new low-yield version of the W-76 warhead for existing submarine-launched Trident II (D-5) missiles.

The report follows the first confirmed deployment of the W76-2 on board Ohio-class submarine USS Tennessee (SSBN-734) in late 2019.

According to the report, the current W76-1 warhead has an explosive yield of around 100 kilotons. The National Nuclear Security Administration (NNSA) has said the low-yield version, the W76-2, would be configured “for primary-only detonation.” This could mean a yield of less than 10 kilotons.

Congress appropriated $65 million for the W76-2 warhead in FY2019 and $10 million to complete work in FY2020. NNSA completed the first modified warhead in February 2019 and began delivering warheads to the Navy by late 2019. NNSA has not disclosed the total number of planned W76-2 warheads, although it is expected to be a very small portion of the W76 stockpile (estimated, in unclassified sources, to be around 1,300 total warheads).

The Trump administration introduced the low-yield version of the W76 warhead in the 2018 Nuclear Posture Review (NPR). As noted by CRS, the NPR launched a debate among US experts about the rationale for the development of such a warhead and the benefits and risks that might accrue from its deployment.

“While some argue that this warhead is a response to Russia’s so-called “escalate to de-escalate” strategy that will strengthen deterrence and raise the nuclear threshold, others contend that it will lower the threshold for US use and increase the risk of nuclear war,” CRS says.

In the wake of the debate, Russia’s official military newspaper Krasnaya Zvezda published an article in August this year saying the country would perceive any ballistic missile launched at its territory as a nuclear attack. The article followed the publication of the country’s new nuclear deterrent policy that stipulates the use of atomic weapons in response to conventional strikes.

Additionally, the CRS report says the debate has included discussions about whether a war in which nations used small numbers of low-yield nuclear weapons could remain “limited,” or whether it would inevitably escalate to a more extensive nuclear exchange.

You can read the full report here 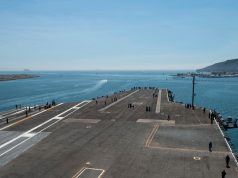 US carrier Theodore Roosevelt back at sea after short maintenance stop 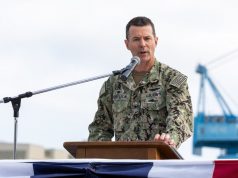